The Churchill Fellowship began with a visit to Manchester – a city of great tradition and growth having a city scape dotted with building sites and development – not surprisingly Manchester has one of the largest number of cranes (n=64) within a city centre. My two day visit was with Prof Claire Hamshire and colleagues in order to discuss how Manchester Metropolitan University (MMU) are supporting their large first in family student cohort (+50% of the student population) – MMU, like Manchester itself, is a campus of contrasts with newly built buildings of glass and concrete nestled alongside older structures characterised by the traditional red brick (including a university owned and run traditional pub – see below!) 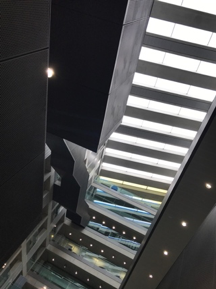 Image 1 and 2: An urban campus of contrasts – old and new buildings nestle beside each other 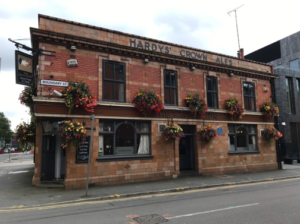 Claire was very generous with her time and we discussed a range of issues including how data on the first-in-family (FiF) cohort is collected at MMU. Previously, this data was defined by parental educational levels but as Claire explained this was not a very accurate measure – many students either declining to answer or not knowing this information. MMU have now moved to asking students directly: Are you the first in the family to come to university? This direct question provides much better data from which to identify and track this cohort – such simplicity and directness should be something that universities in Australia consider implementing as a means of identifying this cohort. 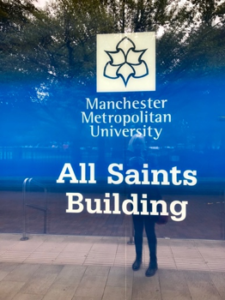 Claire described the main obstacles encountered by this FiF cohort as including:

MMU is a city campus which means that it seems to merge seamlessly into the city scape that surrounds it, as you walk through the campus it is difficult to differentiate between where the campus stops and where the city begins. Despite this close spatial and aesthetic proximity to the city, FiF students do not necessarily feel comfortable within this setting. I asked Claire about the types of supports available to this cohort and she explained that support was not differentiated based on background or demographics but did explain that MMU were grappling with two big issues around student support:

To combat both of these, Claire suggested that a more embedded approach to support services should be adopted, this included ‘wrapping these into the curriculum’ so that these supports are not an ‘add on’ but instead part of the mainstream delivery of subjects. Finally, like myself, Claire advocates a celebratory discourse around the FiF student and also reflects upon the need for students to be supported to accept failure as a necessary part of the university experience. Claire termed this ‘failing better’ which draws upon the positives of what you have learnt from this failing and how this can underpin the development of more resilience for students – so basically reframing ‘failure’ as a necessary part of student learning.